Relae was the last of the Michelin starred restaurants we visited during our time in Copenhagen and it was based in the slightly rougher part of town – mind you, it’s worth bearing in mind I’m a total wimp!

The restaurant had a totally relaxed feel about it; the wine and water were left for you to help yourself and there was also rather loud music which made for an even more informal atmosphere. The cutlery, napkin and menu were placed in a specially made drawer underneath the table which was quite clever. The tables were awfully close together though – the kind where you’d knock your neighbours cutlery off when you go for a wee. 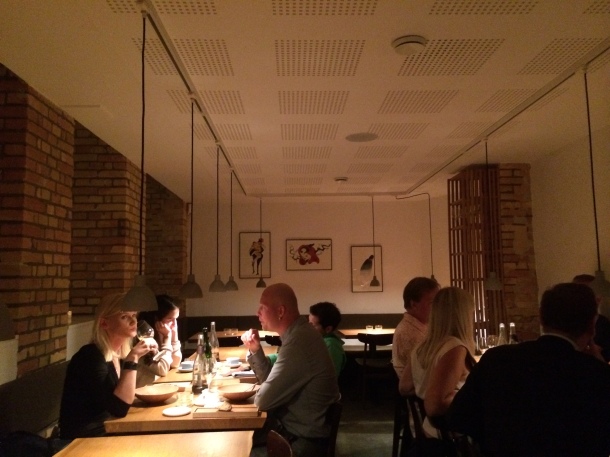 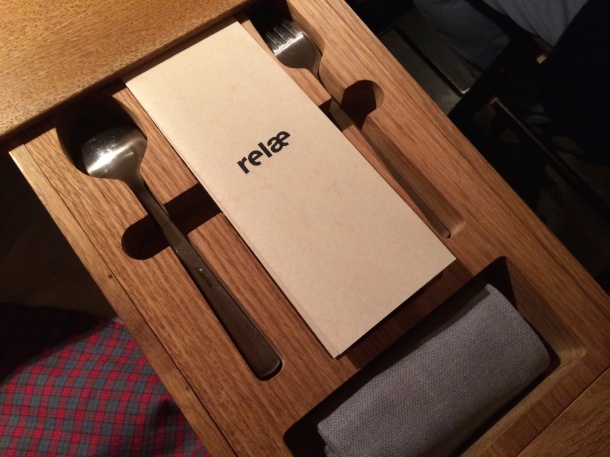 After 8pm a seven course tasting menu priced at 725 DKK (roughly £76 ) is available so we went for that. First up was some sourdough bread that had a gloriously treacly crust served alongside some great quality olive oil.

Our first course was trout, chicken skin and mushrooms which, due to the whole thing being covered in grated raw mushroom, had an overbearing flavour of the stuff. It was enjoyable, just a little basic and one dimensional.

Next was a strip of cucumber covered in a vibrantly green, stripey sauce. It certainly looked impressive but like the dish before, there was only one flavour present. As much as I love a bit of cucumber, it’s not exactly a life changing flavour is it?

The risotto made using sunflower seeds instead of rice was really clever and it tasted utterly divine. Kornly (a type of cheese) had been used to make it extra rich and creamy and the grated truffle on top added some extra decadence.

I struggled to get my head round the next dish; courgette and grilled goat cream. The poor courgette had been tampered with to buggary, first being dehydrated and then rehydrated, leaving it with a chewy and most unpleasant texture. Why bother going to all that effort to produce something so positively minging?

The plate of beautifully cooked havervadgård lamb could have had a more flamboyant presentation. It was covered with Swiss chard and seaweed which was a shame, the meat was so wondrous that it deserved to be shown off.

We decided to share the cheese (roughly £10 extra) which was odd to say the least. Melted Nordlys (a type of sweet cheese) atop a thin wafer sprinkled with dried berries wasn’t what we were expecting but it was pleasant never the less. 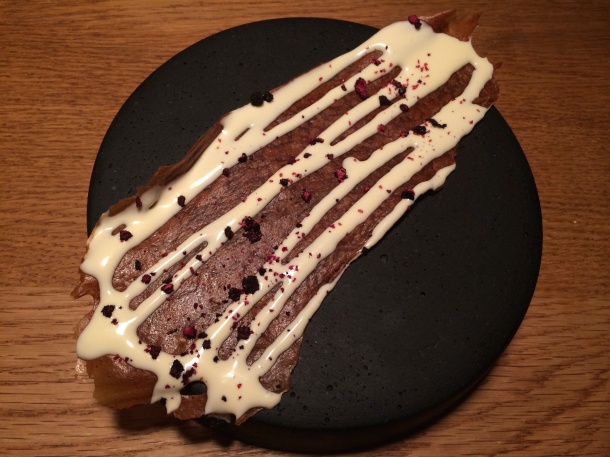 First of the sweet things was a little cup of raspberry mousse topped with frozen raspberries and it was certainly a melange of different textures. I preferred what was next however, sweetcorn and marjoram. It was a really interesting balance of flavours; the sweetcorn ice cream was dusted with a fine popcorn dust which was great and something I’d never seen done before. 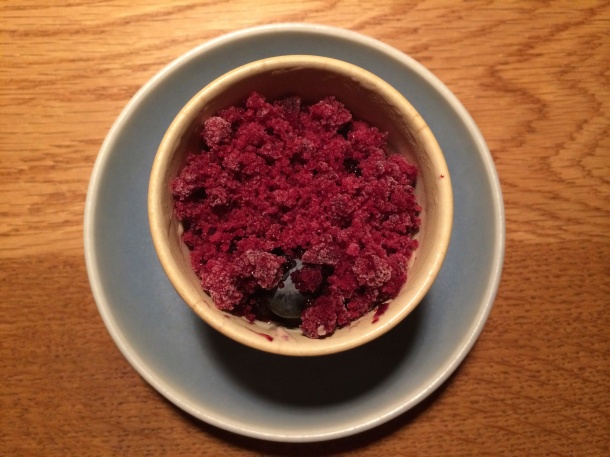 Relae was the more relaxed and trendier of the Michelin starred restaurants we visited whilst in Copenhagen. But we found the same problem here as we did with the others – all the hard work and effort that goes into each dish, resulted in a plate that doesn’t taste very good. A slice of cucumber and a courgette that has been dehydrated and then rehydrated just doesn’t really tickle my pickle.