You don’t hear much about Mr Chow these days. In the 90’s, you weren’t anybody if you didn’t get papped leaving this high end Chinese restaurant in Knightsbridge. It has always been on my list though, so we popped along for dinner.

It was far smaller than I expected. We were seated in the ground floor dining room which is split into two sections by a huge glass divider. The tables were ludicrously close together – once wedged in it was actually impossible to go for a wee without completely moving ours and our neighbours table.

Prices aren’t cheap but then again, it’s Knightsbridge right? Even more reason then why I’d rather not have a laminated menu. To start, the chicken satay (£6 a skewer) were Luke warm. The sauce which had a weirdly grey colour, lacked any flavour and the chicken, which had an odd bright pink colour, also failed to bring anything to the party.

Salt and pepper prawns (£17) were great but then again, I don’t think I’ve ever had bad salt and pepper prawns. The Mr Chow spare ribs farci (£15) were little de-boned lamb ribs which were full of gristle. Gristle! I had to spit half of every mouthful out. I longed for the similar version available at Hutong which are just incredible.

The duck and pancakes (£34) was as good as you’ll find in any local Chinese. There was an exceptional amount of fat though – don’t get me wrong, I’m all about crispy duck fat but there was very little meat. There was plenty of plum sauce though which was a positive. 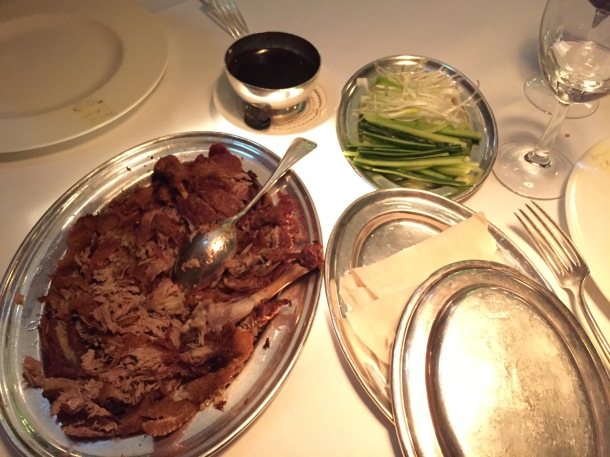 Beijing chicken with walnuts (£20.50) which was basically sweet and sour chicken had the most peculiar texture; like that of Quorn. The flavour was fine, but I couldn’t say more than that really. The best thing we ate was the fried rice (£6 per person) which had loads of prawns and scallops mixed in. I would have gladly eaten a bowl of that to myself.

Service at Mr Chow was truly dismal; plates were literally thrown down on the table and the staff would avoid making eye contact at all costs. Rude would be putting it politely. But what do I know? The place was heaving and people seemed to be loving it which is rather depressing, as everything about the place is really rather rubbish.