It seems only fitting that the theatre company Les Infants Terribles and jelly pros Bompas and Parr would team up to make an immersive dining experience based on The Twits during the 100th anniversary of Roal Dahl.

The experience takes place in The Vaults underneath Waterloo station and at £80 per person it isn’t the cheapest of nights out but for the effort involved by all to ensure a fun night is had, it feels pretty good value.

The evening starts in a cocktail bar which feels a bit like an air raid bunker. I order a ‘Hug Tite’ which is essentially a glass of Prosecco with a twig in it and an accompanying tube of peach puree which you had to squeeze in. It’s boiling hot, not helped by it being one of the hottest days of the year. There’s a woman hunched on a chair with giant legs. (That’s the chair not the woman). It’s all a bit weird, then it gets even weirder.

We’re taken into an even hotter room which has a giant tree in it. People dressed as monkeys serve canapés like cold chicken hearts and burnt sausages. There are other snacks dotted around the room for you to try. I see one woman eating a piece of bark only to tell her friend “no, that’s definitely just bark.” Spaghetti worms sat in a pulsating box making them look alive – it was all very disgusting but most intriguing.

It’s here we’re first introduced to the Twits, played by Christopher-Robert Barlow and Lizzy Dive, who have just the right amount of believability and panto between them. They take us to the main hall where we’re seated at sharing tables round the edge. The carafes of wine (included in the price) help lubricate the conversation.

The meal consists of Mr Twit’s game bird pie, which has a pheasant foot sticking out of it – not one for the faint hearted. The pie itself is good with particularly good pastry. The luminous parsley sauce bubbles away in a pot which raises some eyebrows. The potatoes are delicious once the brown soil is brushed off them. As food goes, it’s not the best in the world but it fits in with the surroundings and certainly adds to the theatre. 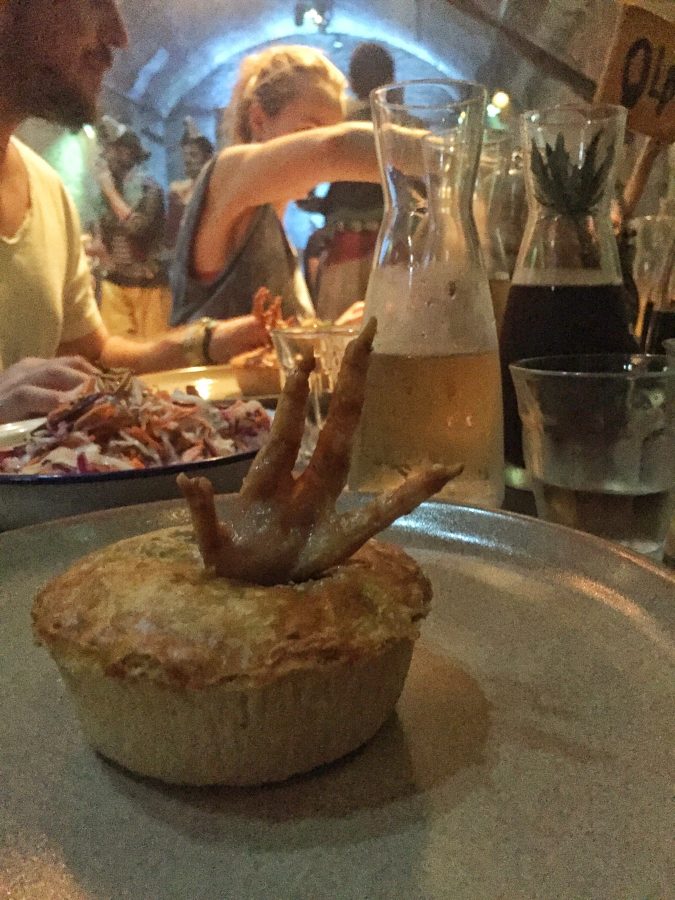 And it’s the theatre I really enjoy. There’s an actual storyline and it’s a good one at that which kept my interest every time they’d interrupt to perform. It’s funny too. I was the butt of a balloon making joke which had me giggling for a good twenty minutes. Other audience participation is kept to a minimum (thank God).

For dessert, we wolfed down a trifle before the monkey waiters brought out trolleys of clean plates for the next show which happened shortly after. Our performance was packed and I don’t doubt the following one was too. Londoners certainly have an appetite for this sort of thing.

For 90 minutes of entertainment, food, booze and an experience unlike anything else I’ve seen Dinner at The Twits can only be admired really. It’s a fun evening out and certainly one I haven’t stopped thinking about since – for a variety of reasons.

Twitsdinner.com
We attended as guests of Mr and Mrs Twit