I don’t mind restaurants with silly names I really don’t. Sexy Fish, Phat Phuc, Scoff and Banter, Pussey Liquor (although that didn’t stay around for long) – a terrible name won’t put me off my dinner. And so I introduce you to Flavour Bastard, which replaces Arbutus on Soho’s Frith Street. 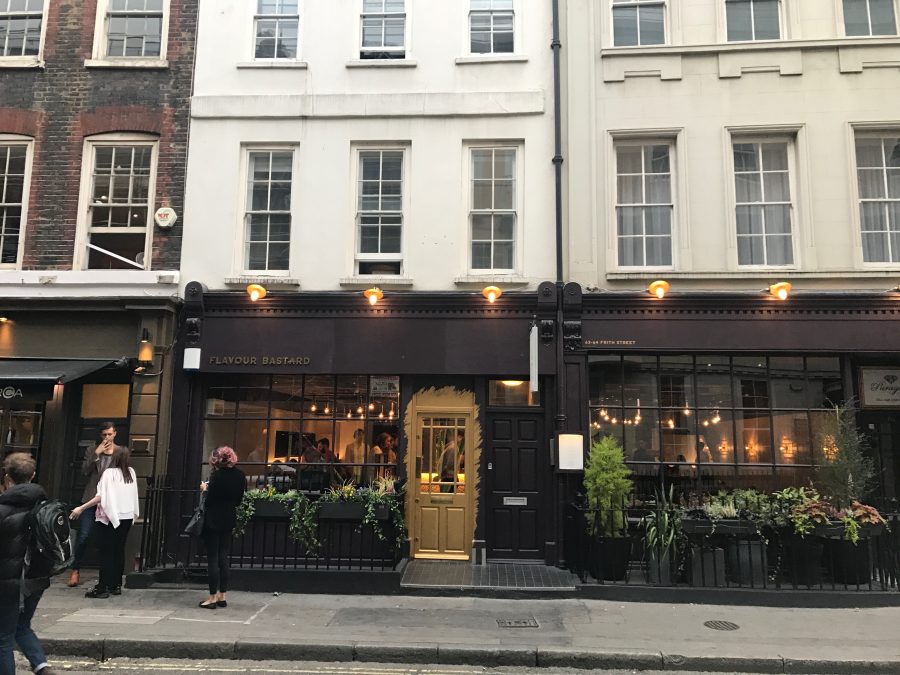 The space is split into two long dining rooms both of which are pretty inoffensive. It’s heaving and a touch loud for my ageing eardrums – maybe some soft furnishings might help reduce the din. Service is sweet and friendly although I could have done without the dreaded “shall I explain our concept?”. 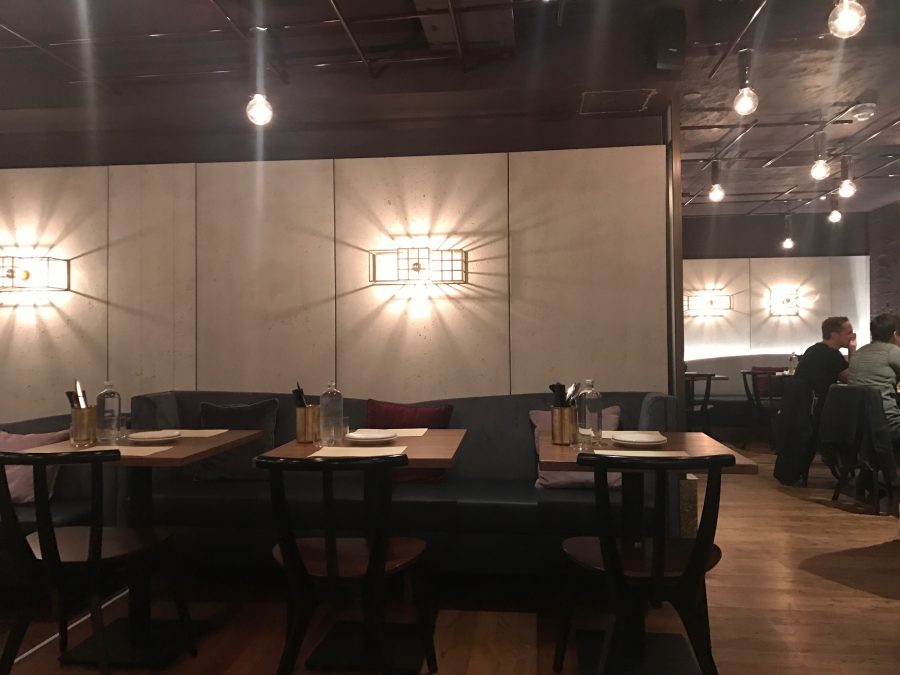 The food is a weird mix of bits and bobs from all over the place and we find it a bit hit and miss. Highlights include deep fried feta (£4) which is the first time I’ve tried the cheese fried and it’s a triumph. It comes drizzled in honey, sprinkled with chopped mint and scattered with walnuts for texture. 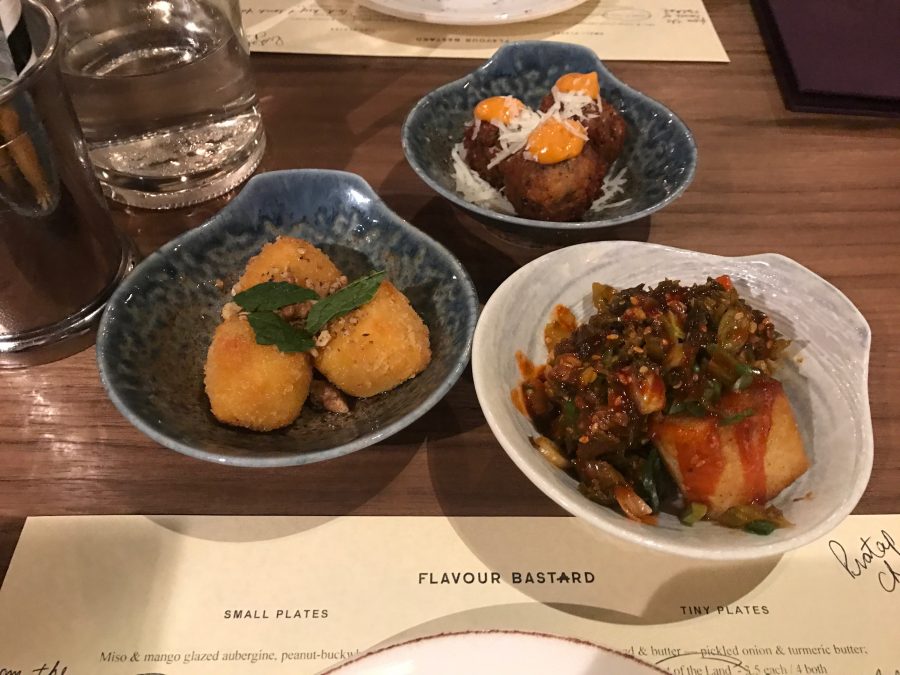 Dingley Dell pork belly (£7) is all fatty and rich – expertly sourced too. It comes with bacon jam which only adds to the richness while pickled carrots add freshness. 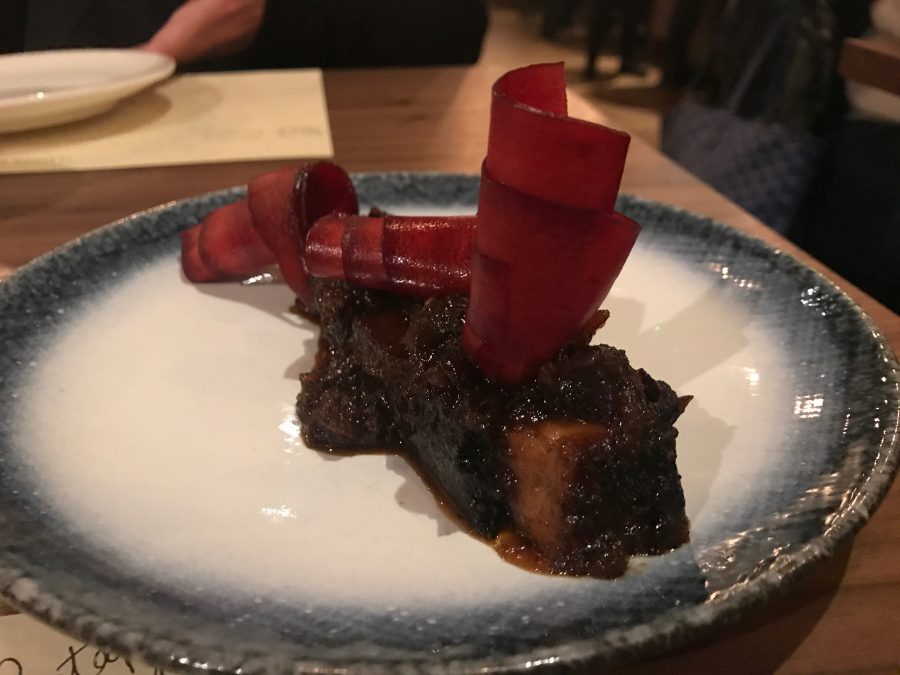 TFC (£7) – helpfully described in biro on the menu as tandoori fried chicken is another dish we enjoy. Fried chicken is rarely an enemy of mine and the spicing with this one adds an unusual element. 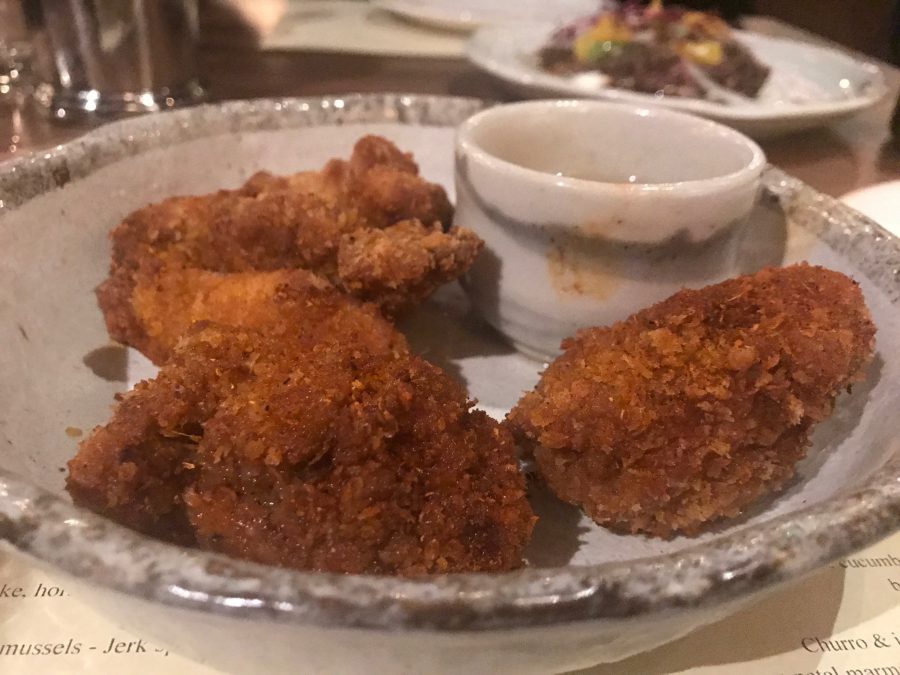 Smoked goat (£8) comes atop a crisp bread and the flavour of the meat is most enjoyable. The orange and pomegranate are a sweet addition which balances the whole thing perfectly. 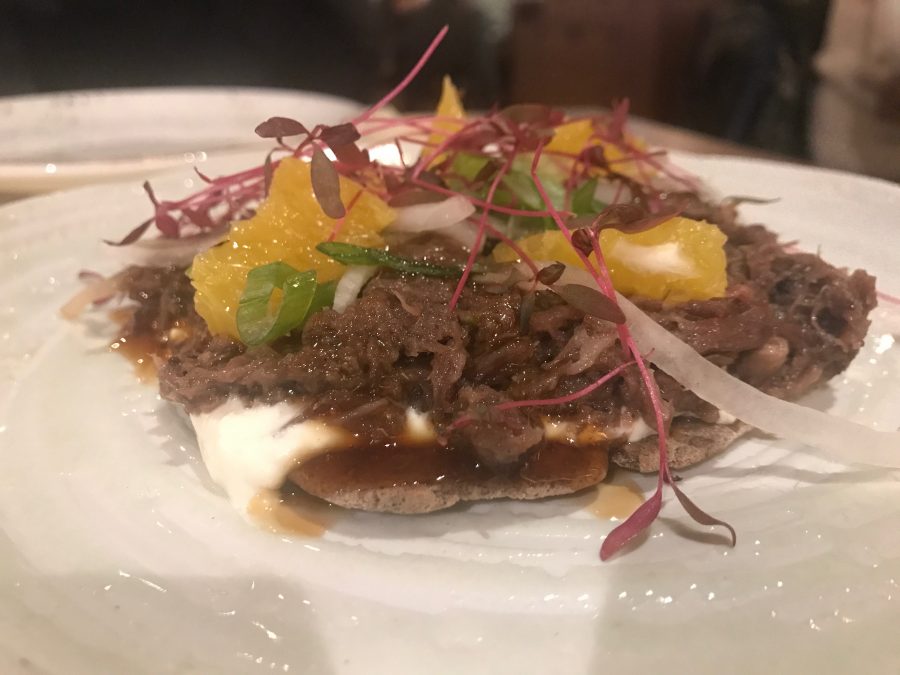 Less successful dishes are “Bastard steak tartare” (£7), which has a distinct lack of flavour, and rubbery balls of white lentil, chorizo and pecorino (£3.50) which are not worthy of their doughnut description. 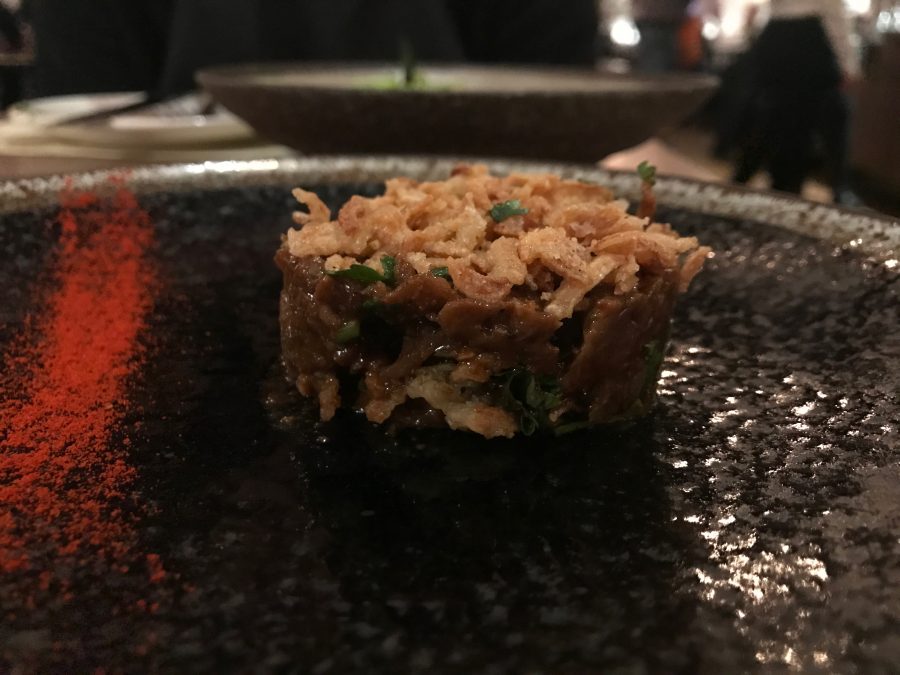 Tuna poké (£8.50) just looks weird after a horseradish buttermilk is poured all over it. The heat overpowers the delicate tuna making it the only thing you can taste. 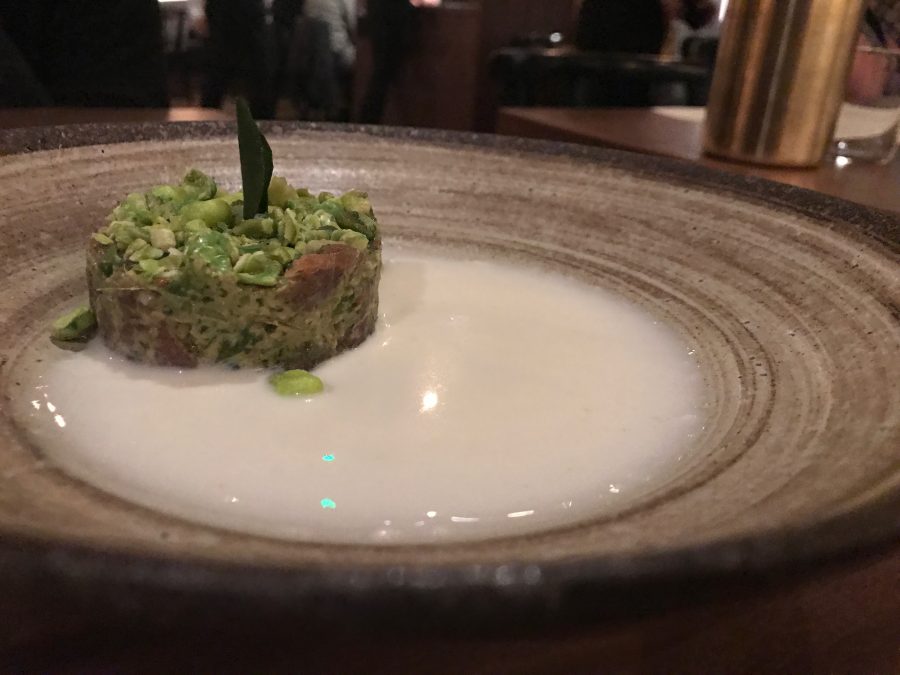 Bergamot tart for dessert gives with one hand: the filling is fresh and fruity but takes with the other: but the pastry is dense and there’s a soggy bottom. Mary Berry would be most disappointed. And I’m not convinced it needs a layer of Japanese red bean paste encasing the pastry – it makes for a strange after taste. 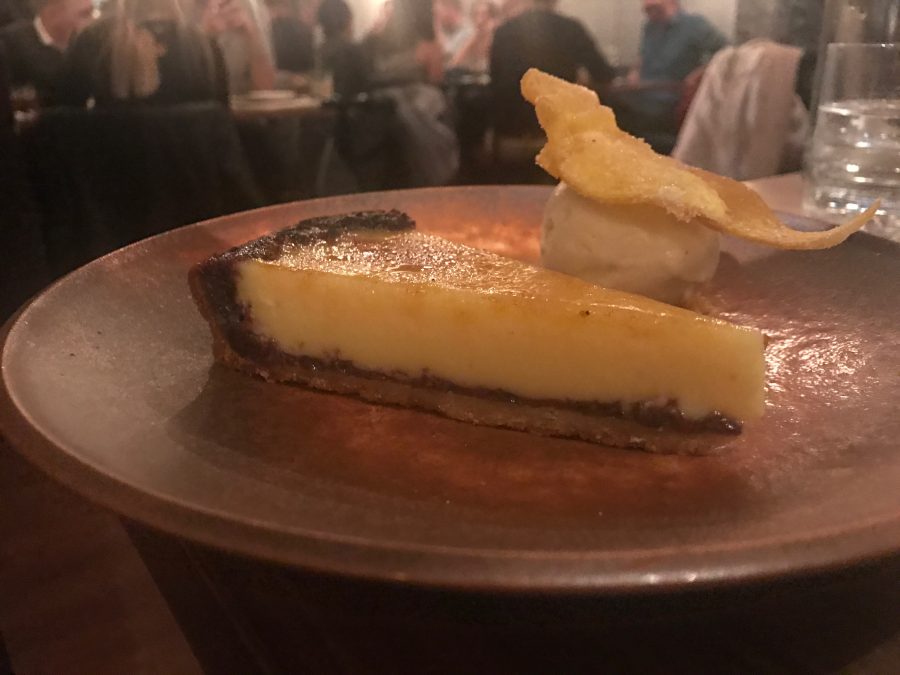 There were certainly highs during our dinner at Flavour Bastard but the lows came in equal measure. The risk is when you’re experimenting with whacky favour combinations and unusual ingredients, they don’t always turn out successfully.

Would we go back? Undecided.

Flavourbastard.co.uk
We dined as guests of the restaurant