Apart from a thoroughly decent Easter chocolate range at Waitrose (that chocolate teapot was lush) Heston Blumenthal’s been a bit quiet as of late. He’s had no UK openings for some time. What he has got is a collection of great restaurants that have been consistently-so for a while. 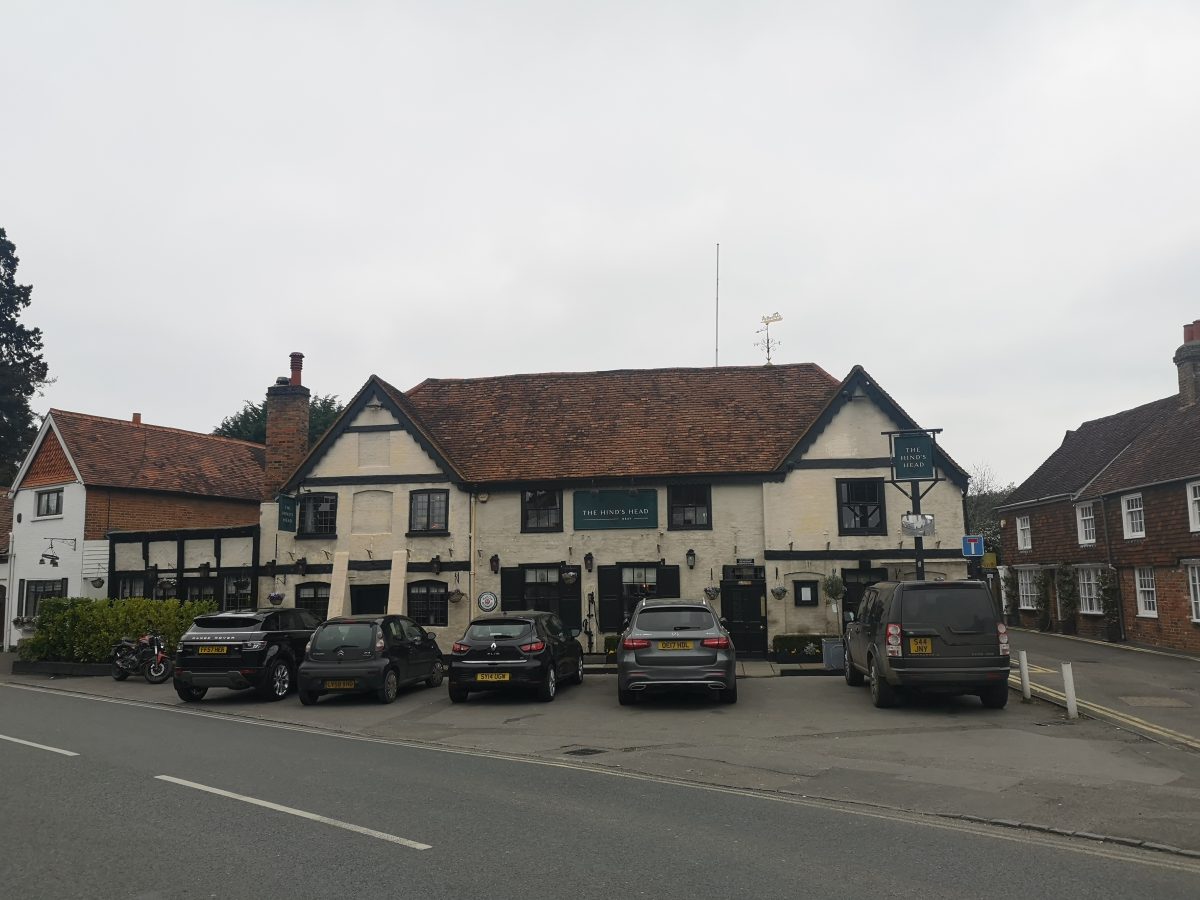 One of those is his Michelin starred pub in Bray, Berkshire, just a few doors down from The Fat Duck. This old coaching inn has been around since the 1400s and was bought by Heston in 2004. It’s all wood panelled walls, exposed beams and stained glass windows. 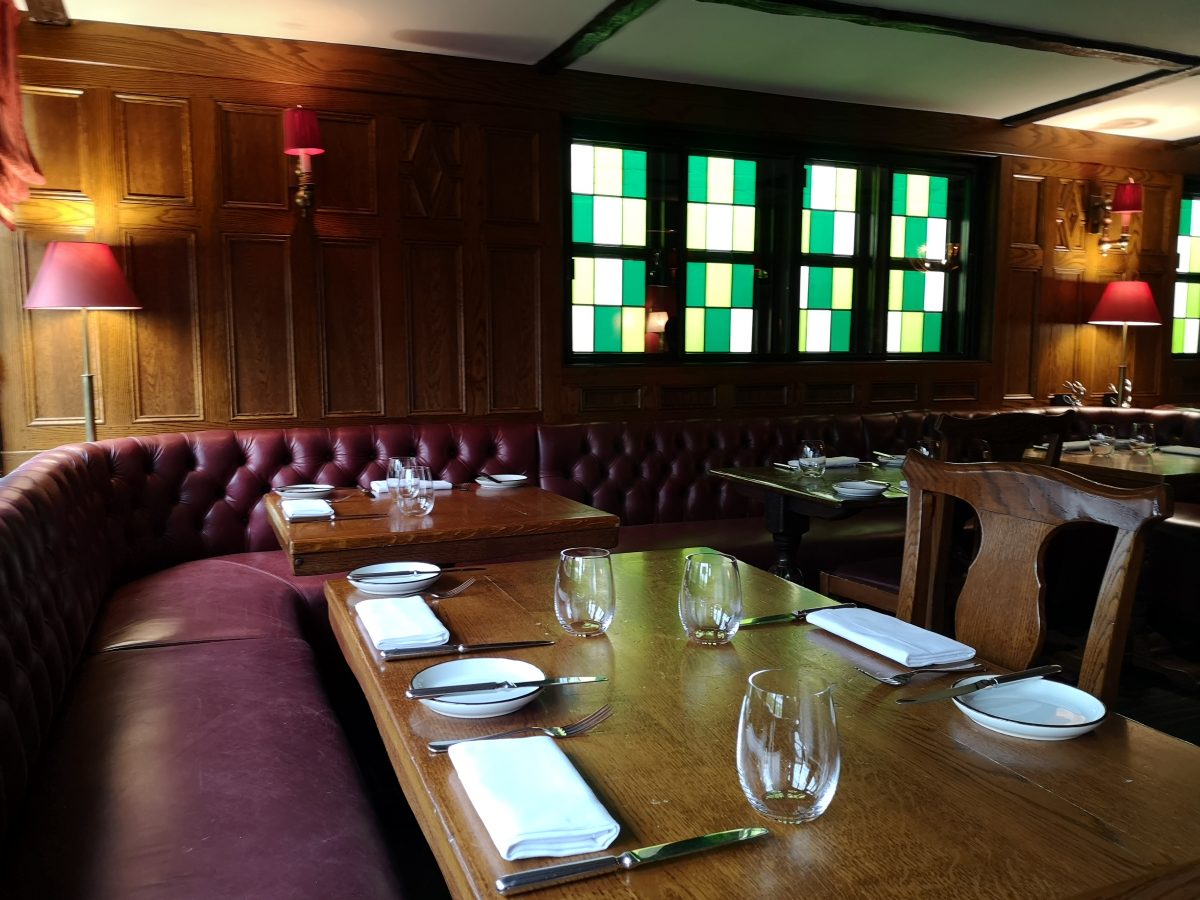 You must begin with a scotch egg (£6) which is one of the finer ones out there. It has everything you need; salty, crisp exterior, herby sausage meat and a gloriously gooey egg yolk. 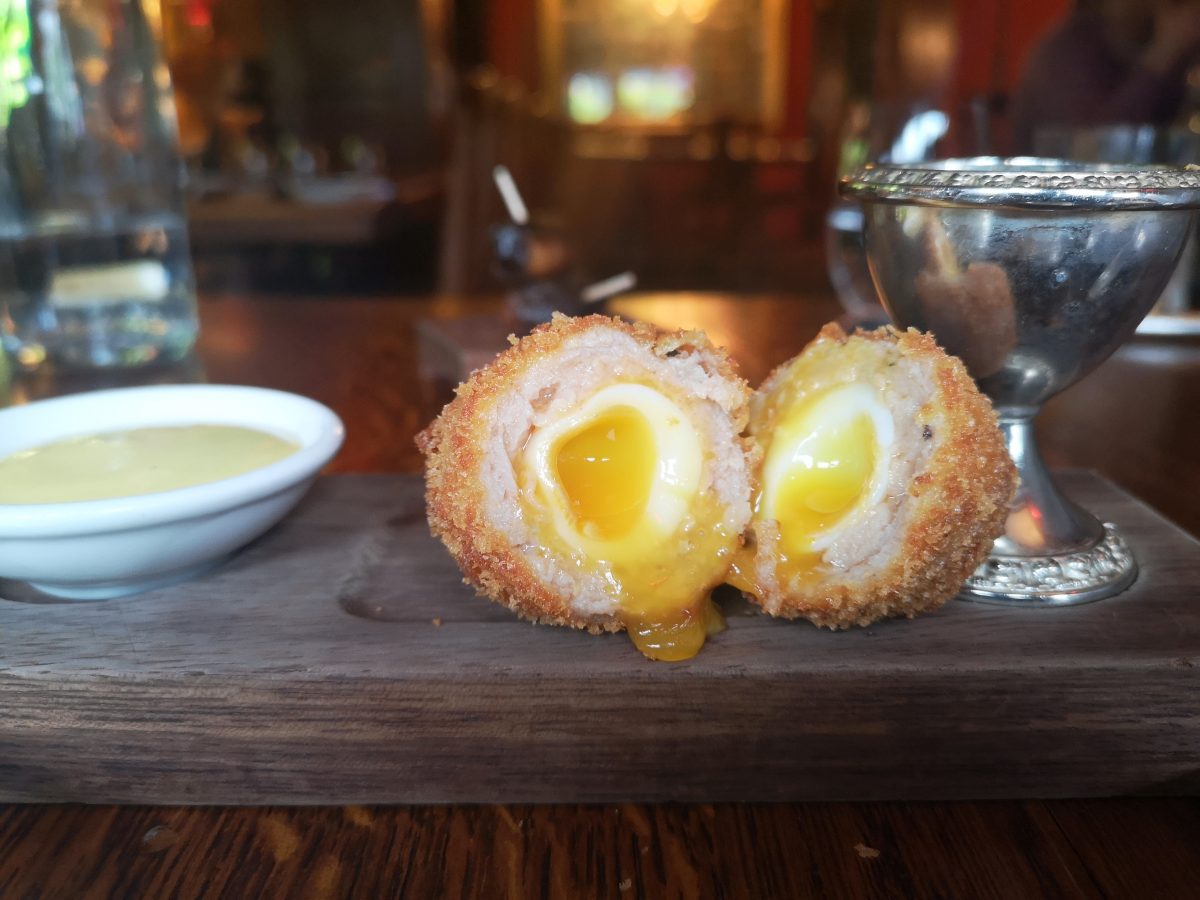 Starters are simple with only cold options which is slightly odd. Hash of snails (£12.50) sees chunks of bouncy snail, perfumed with garlic, sitting atop a slice of toast with pickled walnuts. Mushroom parfait (£11.50) comes with a buttermilk loaf so soft and fluffy I’d like to rest my head upon it and have a nap. 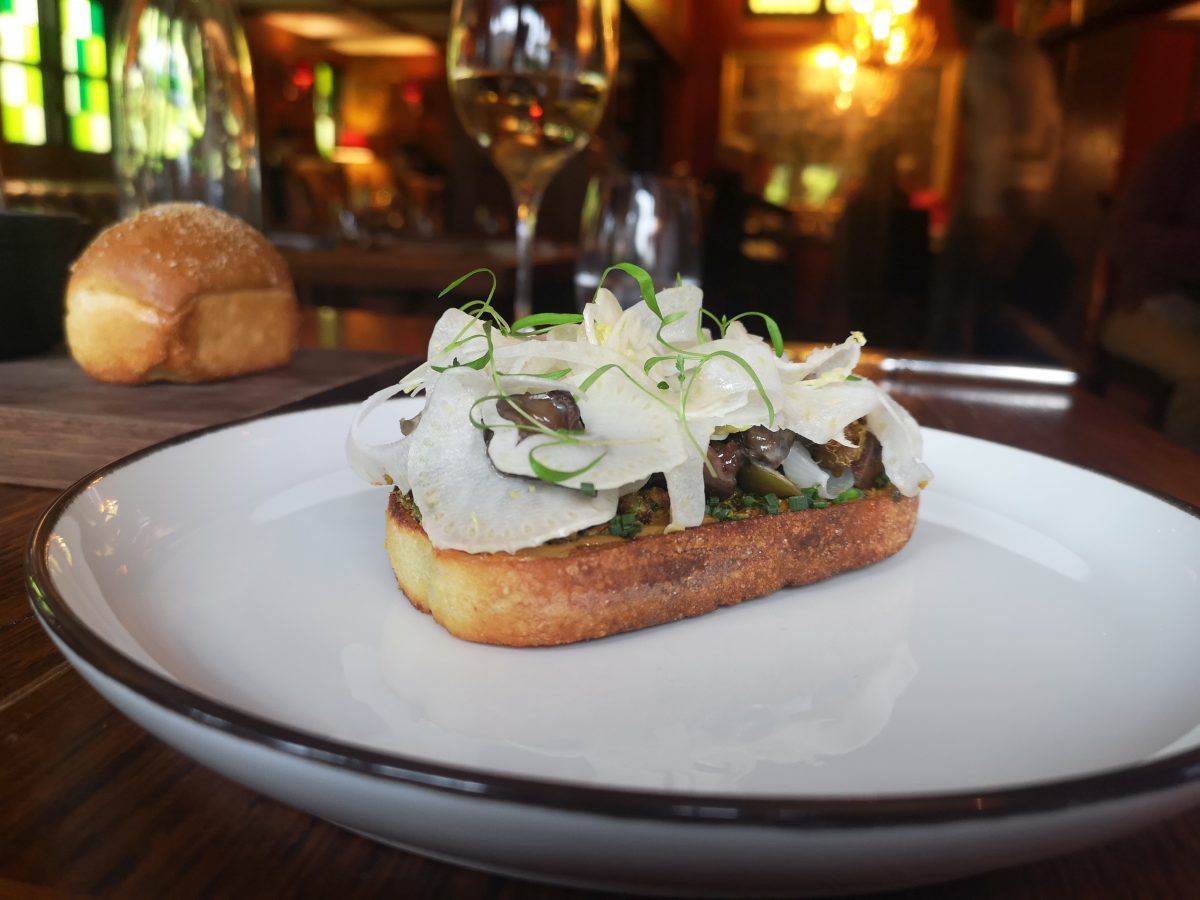 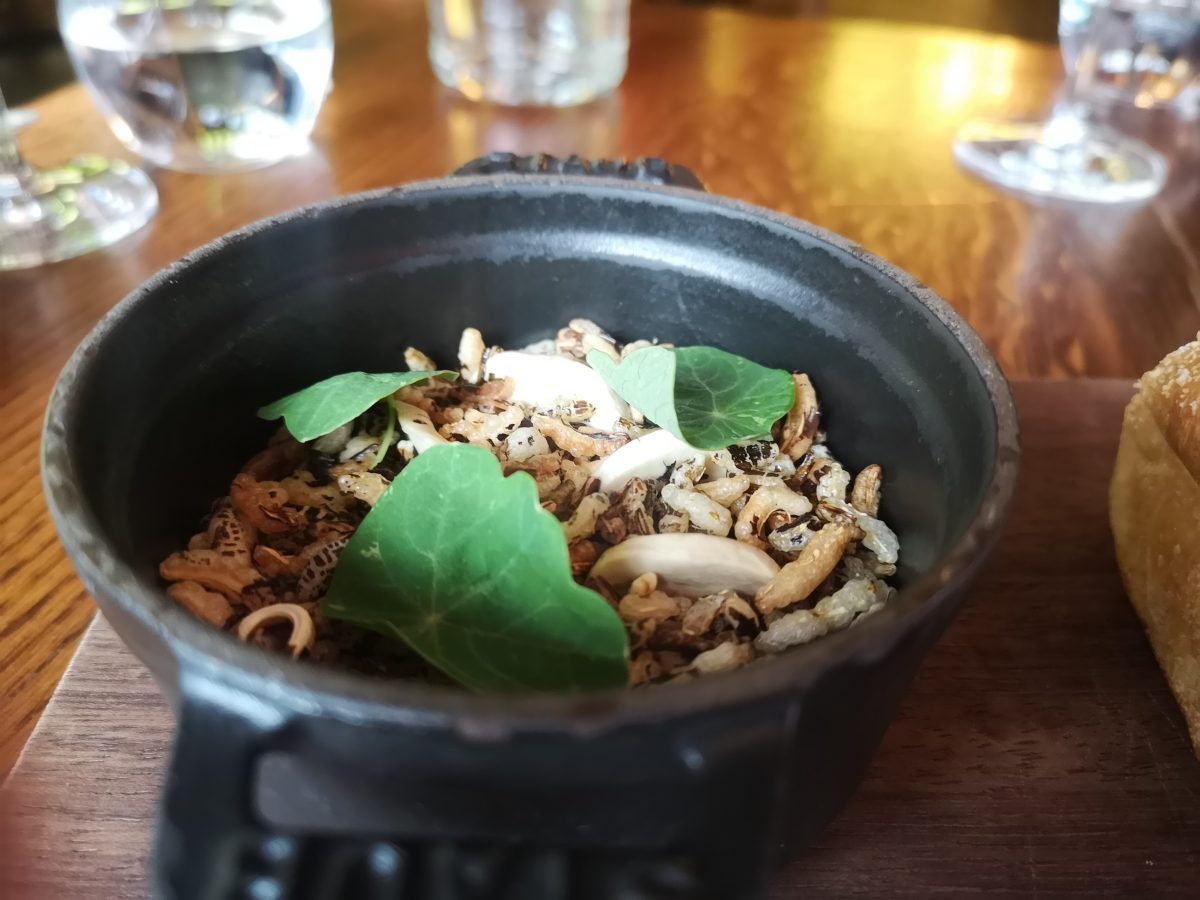 Nice. Very tasty. But it’s the mains that get you really excited. Again, very simple but the Hereford Prime grilled ribeye (£43) is an astoundingly good piece of beef. Triple cooked chips have certainly undergone the thrice treatment as they’re crisp as anything. A melty bone marrow sauce finishes it off. 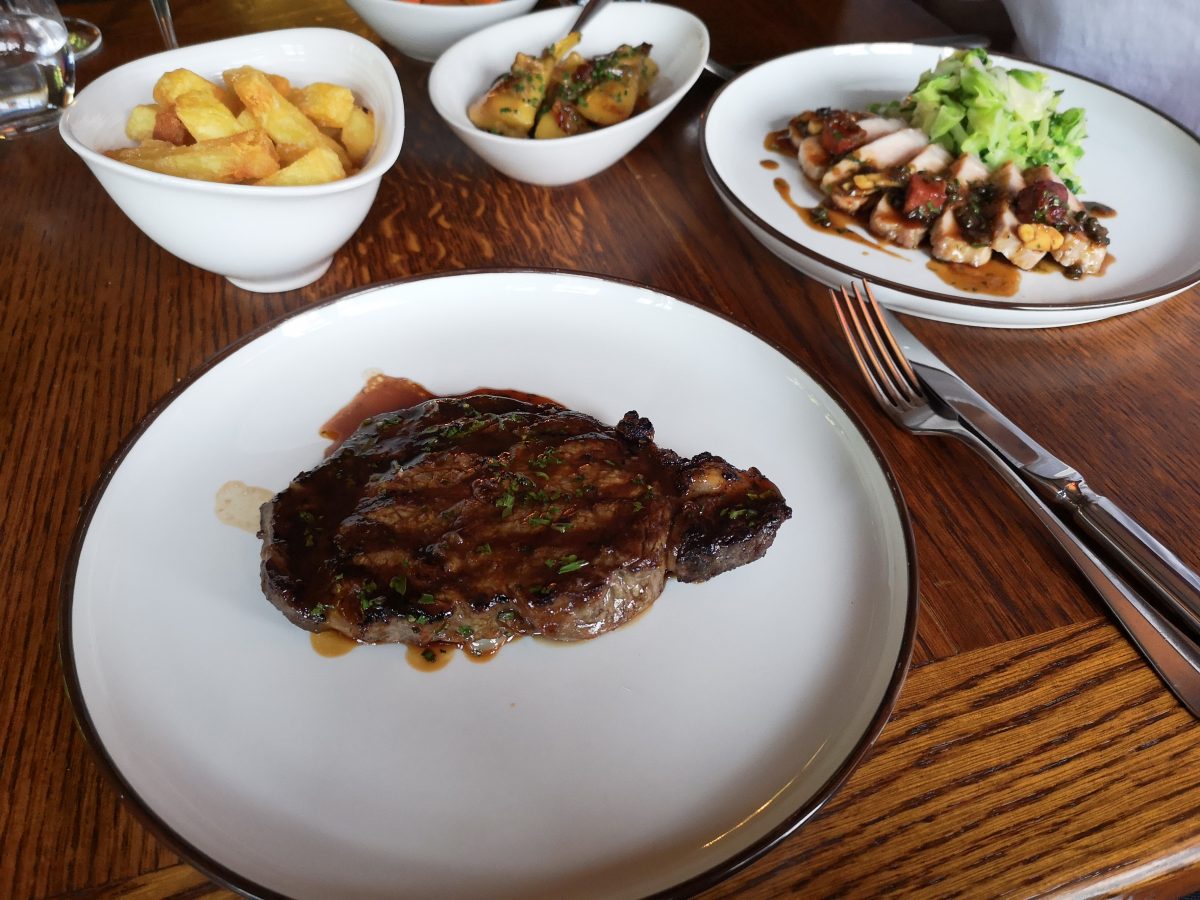 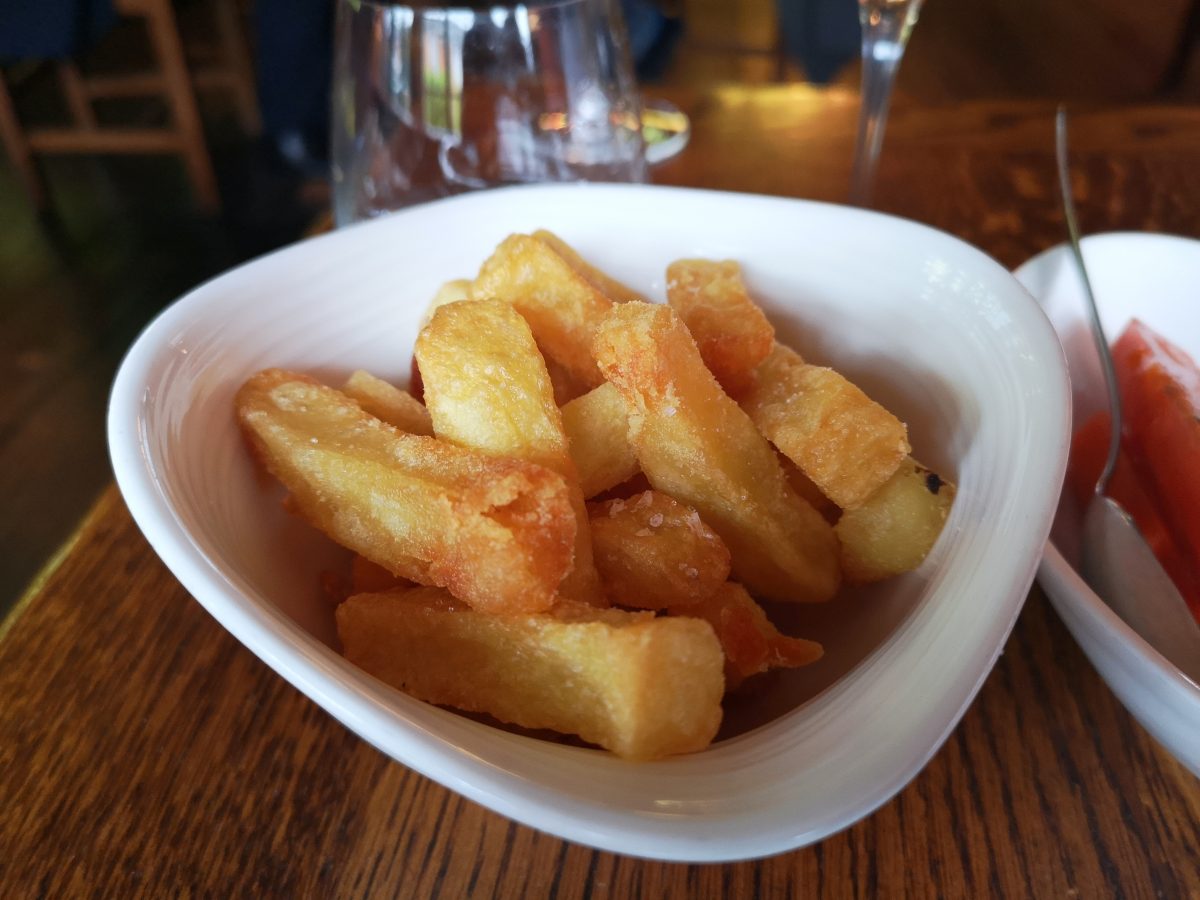 Iberico pork loin (£36) displays more quality produce. The fat on that pork shall stay with me for quite some time. To cut through the richness, a little mound of just-cooked cabbage with choucroute onion, does the job. Sides of bay buttered carrots and curried parsnips with chestnut and bacon (£5.50 each) eat as good as they read. 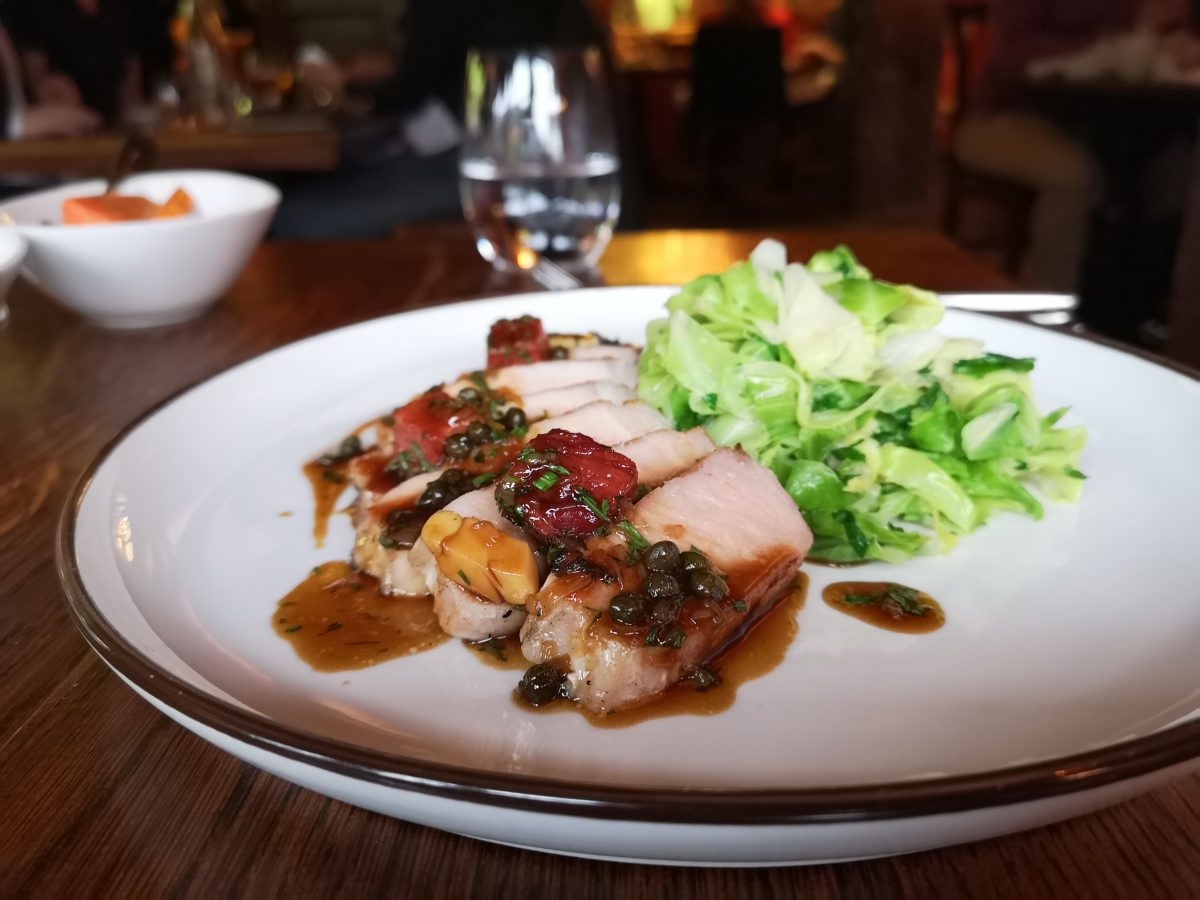 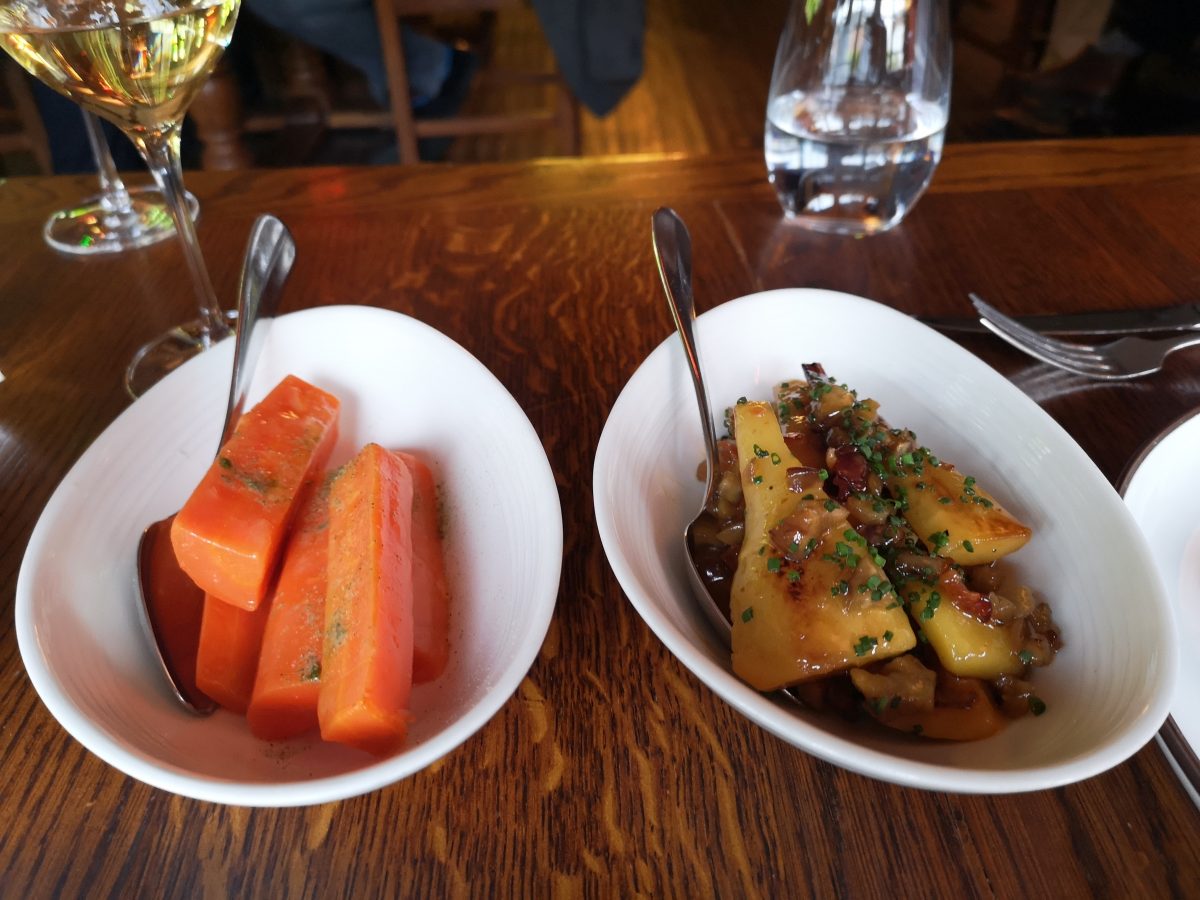 The Hind’s Head is famous for its Quaking Pudding (£9.50) – their take on a Medieval dessert which is a hybrid between a creme caramel and a panna cotta. Most unusual of all is this wobbly delight is served hot. Quite how they make it I don’t know but with its warming notes of cinnamon and nutmeg, it’s bloody lovely. 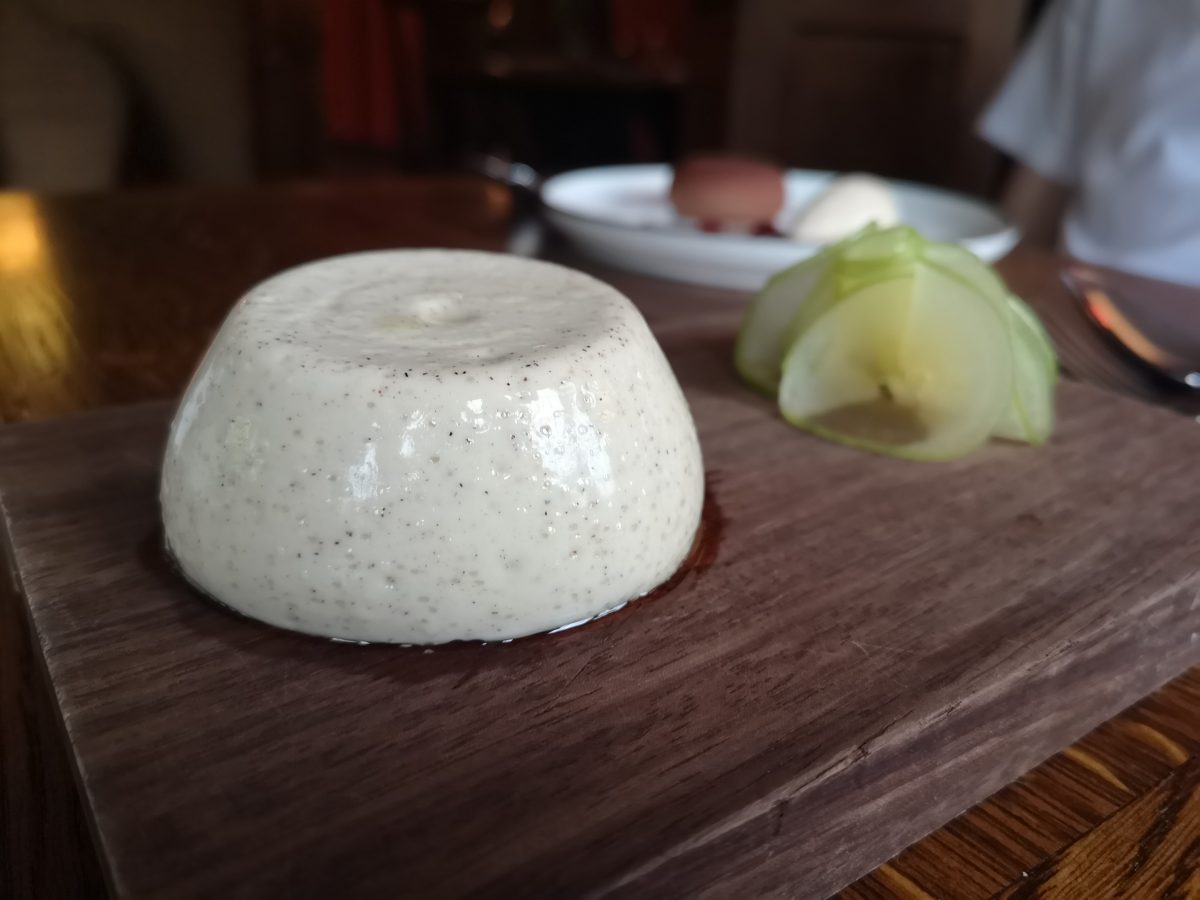 Chocolate mousse (£10.50) is a real looker. The hockey puck of chocolate contains a hidden raspberry centre with some crunchy bits for texture. The blend of sweet and tangy is masterful. 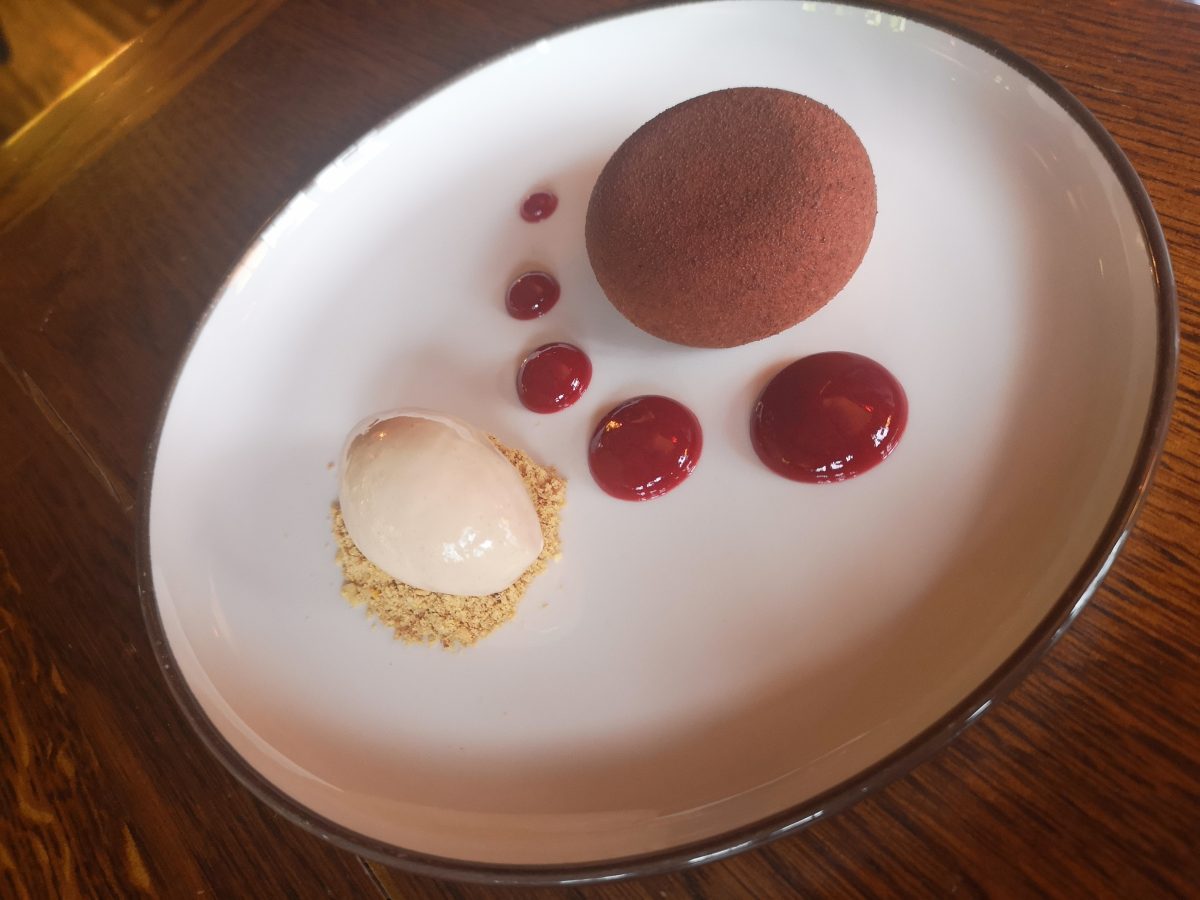 The food at The Hind’s Head isn’t rocking the boat in terms of innovation but what it does very well is serve food you want to eat. Quality produce cooked with care and precision served by passionate and friendly staff. Yum.

Hindsheadbray.com
We dined as guests of the restaurant